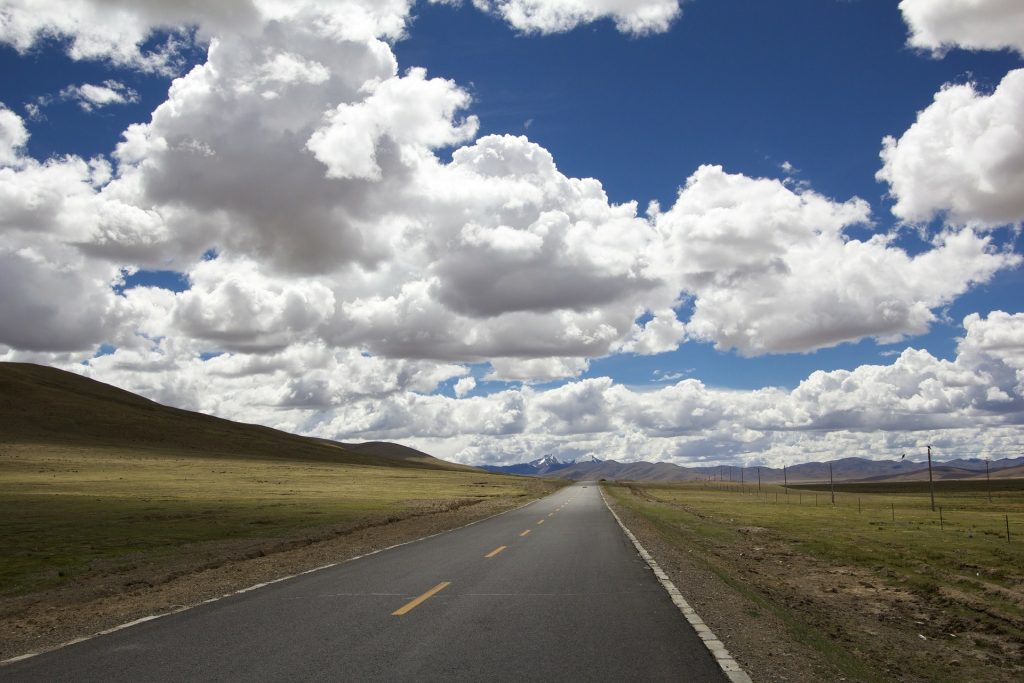 When you’re running somebody else’s race, they’re the ones who plan the route, research alternatives, and ultimately, determine runner safety. When you’re drawing your own route, that’s all on you. Here’s what I look for, in the order I look for it. 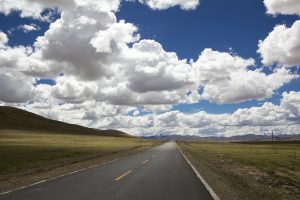 1. A run route that actually exists

You might think this is obvious, but it’s easy to draw a route on a map with a highlighter and call yourself done. It’s even easier to ask Google or RideWithGPS to magically pick the right kind of route for running or riding a bike.

It’s not so good when you go out in the car to check out the route, and halfway through, it ends in a plowed field, which never was a road, and probably never will be.

Likewise, if what used to be a public county road is now a private ranch road, it’s not going to do you any good to climb over a fence and get yourself shot. Exactly such a road exists between Baird and Putnam, TX. When you get about 60% of the way along the eastbound I-20 frontage road between the two towns, it veers away from the highway and the frontage road ends at a gate. That’s right: some enterprising rancher just decided he owned the I-20 frontage road for the next few miles.

Or the north I-20 frontage road near the Nolan County Rest Area west of Trent, TX, which both Google and RideWithGPS show as accessible, except for the big gate visible from street view, and signs near the rest area indicating that the road is part of a weather station or some other official facility and off limits to civilian vehicles.

By now you can tell I set my standards pretty low. But that doesn’t prevent them from being under-met by some pretty gnarly “roads.” I used those quotation marks deliberately. During my solo run of Relay Iowa, I came across a dirt road — part of the planned route — that was classified as a “Class B Unmaintained Service Road”, meaning it was passable only by tractors and other large farm equipment with very wide tires. A sheriff’s deputy who knew about the run told us that a day or two before, he had tried to go down that road and had almost lost the wheel of his cruiser in a rut. We decided to take a 2 mile detour instead. Most races don’t really care if you take a long-cut.

4. A road that has a shoulder

Or in a few lucky cases, sidewalk.

You might think that running on a less busy road would outrank running on a road with a shoulder. But it’s slightly more pleasant to run on the wide shoulder of a moderately busy highway than it is to run on a slightly less busy local road without a shoulder. Onthe highway, you can pull the chase vehicle off onto the wide shoulder in a lot of cases. On the local road, you’re stuck looking for a place to step off when traffic comes.

When I discovered that Manchester, Iowa had a wide shoulder, then sidewalk, I felt like I had won the lottery.

Here’s where it gets tricky. There’s “not busy”, which can be so isolated and rough that it’s a real journey just to make progress, and there  are “busy” highways that never see traffic to speak of. The following types of roads are non-busy in their own way, but they have tradeoffs.

In Texas, these are the least busy roads with shoulders. Roads labeled RR-### and FM-### tend to be long and straight and are relatively quiet. Most of the traffic they’ve historically gotten was farmers and ranchers just trying to get goods to market.

FM roads don’t always go where you want them to, though. They tend to run between towns, but not much farther beyond them. What I mean is, nobody ever built a RR or FM road with the goal of driving across the state line to sell livestock or produce (applicable state laws and sales taxes may be different, after all), so it’s entirely a coincidence if you’re running from one state to another and the FM you’re on happens to continue.

RR/FM roads are great, except when they pass through a metropolitan area and have been developed into 6-lane highways (for instance, FM-3040 in Lewisville, TX), or go nowhere in particular. Even then, they usually have shoulders.

Usually indicated by a shield with numbers; typically these cut across states, connecting major metro areas. They tend to have more lanes and faster traffic, and they’re busier. Oddly, my experience has been that they often have little or no shoulder.

In remote areas, they can be a great way to go in a straight line between outposts of civilization. Many US highways were the predecessors of the Interstate Highway System — for instance, the now-100-year-old historic Bankhead Highway, along whose route much of I-20 runs.

Elsewhere, where there was no point in building an Interstate, US Highways are still the fastest way to get from here to there by car.

Which is not so great for runners.

In many cases, when the Interstates were built, they “replaced” US Highways, which is why for a long stretch between Greenville, TX and Texarkana I-20 is also called US-67. The good news about that is that in most cases, the federal government left something of the original two-lane, two-way highway as a frontage road for the Interstate.

These two-way Interstate frontage roads often diverge quite a bit from the Interstate, and when they return, they parallel a very straight and well-maintained route, often with shoulders, that’s well served by gas stations, restaurants, and hotels. They truly are local road versions of the Interstate.

If you check with your state Department of Transportation, you’ll often find that while the Interstates are dangerous, and in some cases ILLEGAL to run on, these frontage roads are NOT off limits to runners.  That said, one must be VERY careful to pay attention to traffic exiting the highway, especially if you are running on the right side of the Interstate (even when facing traffic), or you can still be hit from behind at high speed.

State highways are usually well-paved roads that carry a little bit more traffic than RR / FM roads. Shoulders aren’t usually that great, and since they tend to be busier, it’s better to avoid them unless they’re the only way to connect two less busy roads. People don’t expect to see runners on ANY of these roads, and drivers tend to go faster on state highways than on RR/FM roads and County Roads. But if you keep your head up and pay attention, it beats a 30-mile detour.

In Texas, county roads are not reliably paved. for instance, in the case of Old Colorado City Highway, bka CR-290, bka CR-1308, which not only changes names, but changes from paved to gravel to paved again just as often.

What constitutes a safe road?

Usually, it means the same thing as “not busy.” But I encountered quite a few “not busy” county roads running across Iowa that had no shoulder, blind curves, and hills that prevented oncoming traffic from seeing a runner until the last minute.

To me, those roads are not safe. I’d rather be on the wide shoulder of a 6-lane local highway (i.e., not limited access via entrance / exit ramps).

That’s not to say it’s safe to run on the highway either.

Finding a road that’s safe is more of an art than a science. Look for something that’s not busy even at rush hour, has a wide shoulder or sidewalk, and has plenty of spots to sit down, pull the chase vehicle to the side of the road, and has a speed limit of 50 mph or less. Often, these are the “industrial” boulevards through business parks, or wide roads through a populated downtown area — where traffic as a practical matter is limited to about 40 mph and there are lots of stop lights and protected street crossings. These are also areas where people expect to see runners.

Designated bike routes (usually indicated on Google Maps by a dotted line) are also often safe roads to run on, since townspeople have often been trained to expect bike traffic and as a result, drive more slowly and carefully.

In the country, safer roads tend to be (but aren’t always) a combination of Farm to Market or Ranch Roads and Interstate frontage roads.

7. A route that’s straight — but not monotonous

Running on a straight road can be a challenge. Seeing the same stretch of asphalt and gravel for 14 hours a day can be mind-numbing. You can find yourself talking to yourself, singing, or counting guardrails. After a while, you get desperate for landmarks, information about how far the next turn or town is, and more. It can almost drive you crazy.

Roads with lots of little twists and turns are generally longer than straight ones. I know that’s obvious, but if you want variety, you have to come up with a compromise between these two extremes.

When scouting your route, if you have a long, straight road, take note of the locations of pull-offs, crossroads, road signs, and the abandoned Greyhound bus station 10 miles east of the taco stand in Cornudas, population YOU. You’ll be glad you did.

8. Whatever road there is

Sometimes you don’t have a choice.

When there’s only one road to take (US-62 / US-180 from El Paso to the NM border, RR-652 to Orla, then US-285 to Mentone, TX), and it goes up 5500 feet through a mountain pass, and the only accommodations are a campground and a truck stop 50 miles apart, be glad there’s a good shoulder and a place to bed down for the night. Enjoy your cheese crackers at the pull-off by the oilfields, wear a dust bandana on your face, treat that can of diet root beer like fine wine, and enjoy sleeping under the stars, even if it’s a bit chillier than you expected and your legs are screaming.

Take care of yourself, go slowly, and don’t take risks.

If your only other choice is to chance running the shoulder of the Interstate in an area where runners are known to have been pulled over by cops and told to take a 100-mile detour, then that’s not a safer OR shorter route.

Be sensible. Make the best choices you can, keep your safety and mental alertness a top priority, and try to enjoy taking the road less traveled.

In planning my route across Texas, it’s ultimately what I’ve had to do.

What was it Robert Frost said? That has made all the difference.

← In It for the Long Haul: Endurance Lessons From Running Across IowaUPDATE: After 7 months with the Medtronic 670g, we’re breaking up. →