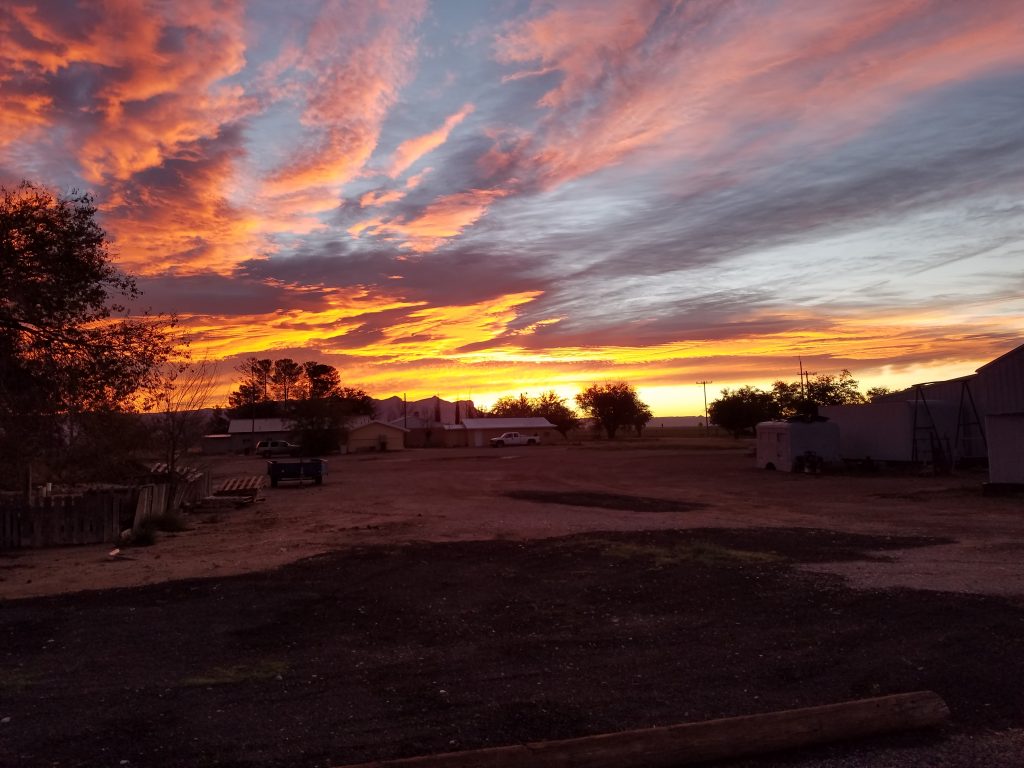 I try really hard to see myself with clear eyes. To know what I enjoy doing and am capable of — and to acknowledge the stuff that I don’t like and the things that are beyond my reach.

I’ve read the race reports from people who love night running. It’s quiet, it’s cooler, the sun’s not in their eyes.

For a long time, I dreamed of being one of those people. They make it sound so romantic — the moon, the stars, the hoots of distant owls — and I can see how efficient it would be to run when it’s cooler.

I live in Texas, so much of my running is done in air temps well over 100 degrees, with a heat index that’s often 110 degrees in the shade, with dewpoints that are often 70 degrees and above for most of the day.

On asphalt in July and August, for example, you’re feeling temps that are literally 120 – 140 degrees.

It takes a whole next-level of support and planning to run in the daytime, in full sun, in these temps. No matter what you do, the heat slows you down big-time.

For example, my pace in January is 12 – 15 minutes/mile on super-long runs. In July and August, it’s 17-20 minutes/mile, sometimes longer.

So being able to run at night would theoretically be fantastic.

I tried to like it. I made myself go out and do overnight runs as part of training for Honey Badger and my original Capital to Coast relay teams. I didn’t want my first exposure to dark runs be at the actual events.

So I know I can run when it’s dark. But the truth is that I hate it and dread it.

For me, night running is depressing. The later it gets, the more it’s the time of day when hormonally many of us are likeliest to have dark, depressing thoughts or simply lose our attention to what’s in front of us, like traffic.

At night, you’re more likely to trip, stumble, or simply miss-guess the terrain.

I also don’t like dense fog, which has been common on my middle-of-the-night runs. I don’t like having to wear a headlight and yet my night vision requires one. And when the late hours roll around, I want to be in bed. Period.

Now that I’m planning my runs myself, start to finish, my goal is flat-out to avoid running in the dark whenever I can.

I’ve grown to like dawn and dusk the most.

For me, dawn includes first light, just before dawn (sunrise). It’s also known as “civil twilight,” and it typically begins about 20 minutes before sunrise.

And my working definition of dusk includes sunset plus last light, which typically ends about 20 minutes after the sun is no longer visible. Last light’s also known as evening civil twilight.

Twilight in general means that there’s enough light to do things outdoors and you can still clearly see the horizon. You’ll usually see only the very brightest stars and you’ll be able to see the outlines of objects.

(Exact times for all of these, for your specific location, are just a Google search away.)

The nice part about dawn and dusk is that you have light to run by, temperatures are almost as cool as during the night, and for the most part, I’m pretty heat-acclimated due to training in Texas during the summer combined with year-round dry and steam sauna training.

At Capital to Coast, I knew my daily mileage goal would force me to run late into the night. At Iowa, I consciously planned to minimize the late nights — but dangerous weather threw a wrench in the works to a degree.

For the Type 1 Diabetes Run Across Texas, the plan is to start around dawn most days. On a few days, I’ll need more hours because the daily mileage is longer and I’ll run out of sunlight if I don’t start earlier.

On those days, I’ll start earlier and let the day’s finish go just a little bit past sunset. Fewer people are on the roads at 5 AM than at 8 PM, so we usually encounter less traffic that way.

Plus — at least for me — psychologically, running into sunrise feels completely different from running into nightfall.

On the few days that I have long mileage (38+ miles) back to back, we’ll still get sufficient sleep, except for the last night, when we’ll get around 6 hours. I’m hoping it’ll be sustainable.

Since the Texas run starts in late March and ends in mid-April, the weather will be  comparatively cool, which will be good practice for the timing of my planned US transcontinental run in 2020, when it will probably be June by the time we hit the East Coast.

Based on weather history, we’re expecting lows around 40 and highs around 70 on the El Paso end of the route, dropping to lows in the 30s and highs in the 60s through the higher elevations of the Guadalupe Pass, and ending in the 50s – 70s in Texarkana.

On balance, it looks like great running weather, barring rain. The likelihood of rain is pretty low in West Texas, but on the west of the state, as I head into the Dallas/Fort Worth area and east, we’ll probably see both rain and thunderstorms on at least a few days.

I’m willing to run in rain as long as I can see where I’m going and I think I’m visible to drivers. If not, we stop until it clears. No run is worth getting hurt or injured or risking major property damage.

This year, one thing I am changing is my timing related to thunderstorms. I read this past summer when I was planning an open-water swim at a local lake that lightning can hit 10-15 miles from where it’s actually raining. The National Weather Service says that’s about the same distance as you can hear thunder.

So going forward, my plan for lightning is to get in the van if I’m hearing repeated thunder. This is a change from my old plan, where I’d wait until the lightning was more like a couple miles away.

And I always take cover when hail or tornadoes are in the picture, as they were in Iowa. In fact, I have vivid memories from the Iowa run of jumping into the van in the middle of a cornfield as a massive lightning storm rolled in and zooming back to the nearest gas station. Leslie nabbed the last available covered spot for our van under the gas station canopy as large hail started banging off all the cars around us.

A lot of folks look at my Texas route and think I’m crazy to run so far south, where it’s warmer and more humid.

This is where I think you have to be honest about what you know how to do.

I understand how to run when it’s warm, humid, and seriously hot. I have a whole list of things I do to stay safe and keep going, and they work pretty well.

Seriously cold weather? Ice? Snow? Serious elevation? I’m a total newbie. I would never consider a route that included all that because Leslie and I don’t know the first thing about it. We were lucky to make it out of the Chicago winters alive when we were in grad school back in the 1980s!

The other issue is that I’ve developed what is probably Reynaud’s phenomenon. Quite a few people with Type 1 diabetes experience it, I gather.

Starting around 55 degrees and below, I have to layer up gloves and mittens on my hands, or my fingers quickly turn completely numb and turn white or yellow, and waxy.

Yes, it’s painful — and you can’t check your blood sugar when your fingers are like that, either. Plus, since the cause is reduced blood supply in reaction to cold or sudden temperature changes, it causes tissue damage.

That gives me another reason to avoid cold temperatures.

That said, it’s a little daunting to consider that I’ll probably start in El Paso in 40-degree temps wearing gloves, tights, a jacket, and knit cap, drop into the 30s going through the Guadalupe Pass due to higher elevation…and cross my finish line in Texarkana in the mid-70s, wearing shorts, a wicking tee, and a sun hat with a Kalahari flap to keep the rays off my neck.