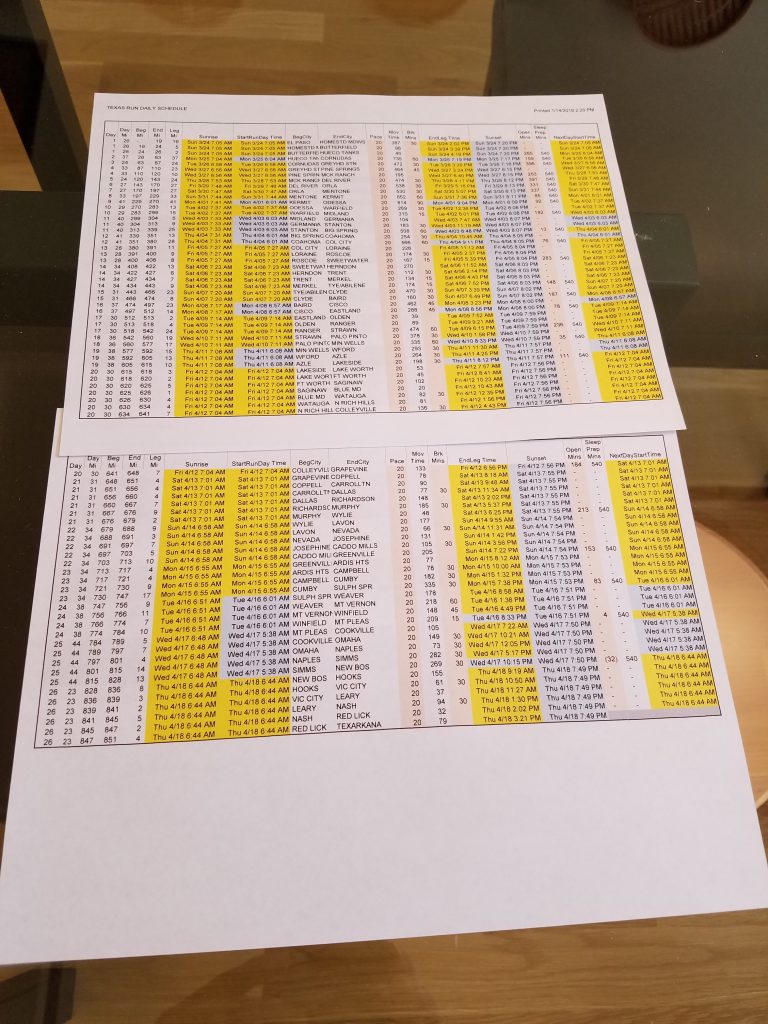 One of the biggest questions you have to tackle when planning an epic run is how many miles you can realistically cover every day.

If you’re Pete Kostelnick, who was 29 when he set the 2016 world record for crossing the United States, it’s about 72 miles/day.

I can’t even imagine putting up those numbers for that long. The most miles I’ve ever run on multiple consecutive days is around 70 miles a day for 4 days, and I was severely sleep deprived and hallucinating afterwards. More about that in a minute.

I now try to focus on being cleareyed about my own capabilities as best I can, and then plan accordingly.

Here’s how my approach has evolved as I’ve gotten smarter and the distances have gotten longer.

The tough part about Honey Badger is that it’s in July. In Kansas. On asphalt, so the actual ambient temps are 120-140. Oh, and in the entire 100 mile loop there is one and only one convenience store.

Otherwise, it’s just a giant loop on some of the flattest land you could hope for. Pretty sweet.

At this distance and given the heat, my plan was to run continuously with no sleep breaks and finish around 30 hours.

I ended up with major blisters for the first time ever, starting around Mile 50, then blood sugars that zoomed up to around 500 at their highest. I was anxious about finishing on time, so I started skipping food / fuel breaks. My sugar then went even higher due to the extra physical stress.

The big takeaway: better blister strategies, and a change in fueling and blood sugar management strategy: eat, but get some insulin so you can store the energy and stop the stress response (I call this “escaping the cheetah”). You can’t not eat when you’re placing huge demands on your body.

On balance, though, no complaints — I hit the midpoint of the race a couple hours before I expected to, overcame the blister and blood sugar situation when it would have been very easy to give up, and kept going to the finish. My mileage goals worked out great, and I finished in 32 hours and change.

At Capital to Coast in October, my goal was to finish 223 miles in 3.5 days — to start Wednesday at 4 AM and finish by sundown on Saturday.

I knew the finish time was non-negotiable because the Corpus Christi police don’t want pedestrians or runners on the causeway that crosses the bay once night falls.

I knew I could easily walk the distance in 5 days, so 3-4 days felt like a legitimate run.

Jacob Fetterolf holds the course record at 62 hours and Rochelle Frisina, the first-ever solo finisher and only female finisher ever, took a little over 70 hours.

This dovetailed nicely with the fact that there were only 4 towns on the route with handy hotels: Seguin, Kenedy, Beeville, and Sinton, TX. Beeville came up too soon in the rotation to be practical. Had we stopped there for the night, the next day would have been much too long.

As a result, the plan evolved into:

In reality, the way this played out meant:

The blisters and soreness come with the territory, so I wasn’t too bothered about that.

I already knew I really don’t like running in the wee hours. Lesson learned, again.

But the biggest issue was that I fell behind on my planned miles per hour, which meant I had fewer hours to cover the same miles. I went with a couple of 15-minute cat naps and skipped or drastically cut back real sleep altogether.  Not good.

Leslie and I came back very clear that we had work do on streamlining breaks and in general, the daily tempo.

And we swore we’d never attempt 70 miles per day again, unless I actually WAS being stalked by a cheetah.

My solo run at RelayIowa in June 2018 wasn’t officially part of the relay — it was really more like a “demo event” where the race organizer sees how it goes and then decides whether to ever let anyone do something this crazy again.

That meant I could make up my own rules. Leslie and I assumed all responsibility for run support and safety, and we were free to make our own rules before and during the event.

Relay Iowa had never had a solo runner before and Bill didn’t have any preconceptions about when I should start.

We all agreed that I would run the exact same route as the relay teams. The real question was how many miles I thought were tolerable.

I’m not much for rolling up in a blanket under a bush, so we based our daily stops in part on which towns had accommodations that worked for end-of-day stops.

I mainly ran through farm towns with only a few hundred or few thousand people, so few had hotels. However, we managed to find six B&Bs, hostels and hotels along the route.

I was determined to get more sleep this time, so I only planned for one night with fewer than six hours: the last day when I planned to cover 38 miles from Dyersville, home of the famous Field of Dreams ballfield, to Dubuque. That morning we planned to make an early start to reach the finish line on time.

As things turned out, we had four serious weather delays, had to pile the miles we didn’t make each day into the remaining days, and I had to hustle to get to Dubuque on time while still covering every mile.

The relay teams ended up skipping some miles entirely due to tornadoes and severe thunderstorms.

After multiple conversations with Bill, the RD, I decided that I would run ALL of the route, even if it meant weather delayed my finish in Dubuque by a few hours (and it did).

The lower daily mileage plan compared to Capital to Coast really paid off: it gave me some “wiggle room” to make up the weather delays and my head stayed in the game better thanks to more sleep, at least until the final hours slogging through river bluffs outside Dubuque.

I reached the finish at the boat dock on the Mississippi River in Dubuque at 9:08 PM Sunday, June 10th, exactly 7 days, 17 hours, and 8 minutes after I started.

And a nice bonus: due to the lower miles and less aggressive schedule, this time I made it 300 miles before blisters showed up, and they were pretty minor.

I also avoided the mega blood sugar spikes and in fact, after the first couple days highs just weren’t an issue. It was the opposite — I had to keep eating to avoid going low. You do that often enough and you realize your schedule has to have room for it. Not just the eating, but the time spent waiting for the numbers to head up again.

I vividly remember sitting on the bumper of the van about two miles from the hotel on a really long day, desperately hoping to get there before last light.

But. I was low. I had to sit, eat, and wait for it to come up before I could finish the day’s run. In the dark.

The victory (apart from finishing): even in our worst case scenario, daily mileage never went about 55 miles.

The 2019 Type 1 Diabetes Run Across Texas

For the 26-day run across Texas in March 2019, I feel like building in time for daily recovery will be critical since I plan to average of 33 miles/day — about 1.25 daily marathons.

At least for this 57-year-old guy with Type 1 diabetes, that feels doable. Only time will tell if I’m right or not.

I think it’s important to keep myself honest: no matter how far I run, no matter what my blood sugar is, I have a 24/7/365 chronic autoimmune disease that is a constant source of physiological stress and inflammation.

My daily mileage plan has to allow time for food and sleep, or I’m not being responsible.

The shortest days will be around 25 miles and the longest days around 43 miles. Quite a few days will actually be right around 33 miles, instead of a mix of shorter and super-long days that somehow average out to the mid-30s.

I plan to do nearly all my running in daylight, or at least starting no earlier than first light which is usually around 20 minutes before sunrise.

Most days will end by last light or shortly thereafter. I’m not actively planning to be running at, say, midnight or 2 a.m. I hate running then and more importantly, I’m absolutely convinced that I need to build in enough time for serious sleep.

The plan is specifically laid out to give me more time off my feet for health, fueling, recovery (and laundry!).

One of the biggest issues is that as I get into the middle of these events, I know I really have to eat, but I’m not physically hungry, and it takes me a long time to work through a plate of food. It definitely affects the schedule.

Some days will still be pretty tough: 5,500-foot ascents (a big deal since I live at 700 feet above sea level!), a few o’dark-thirty starts just because that’s how long it takes to get to civilization that day. And of course plenty of mind-numbingly long, straight, and sometimes busy highways and county roads.

I’ll let you know how it goes.