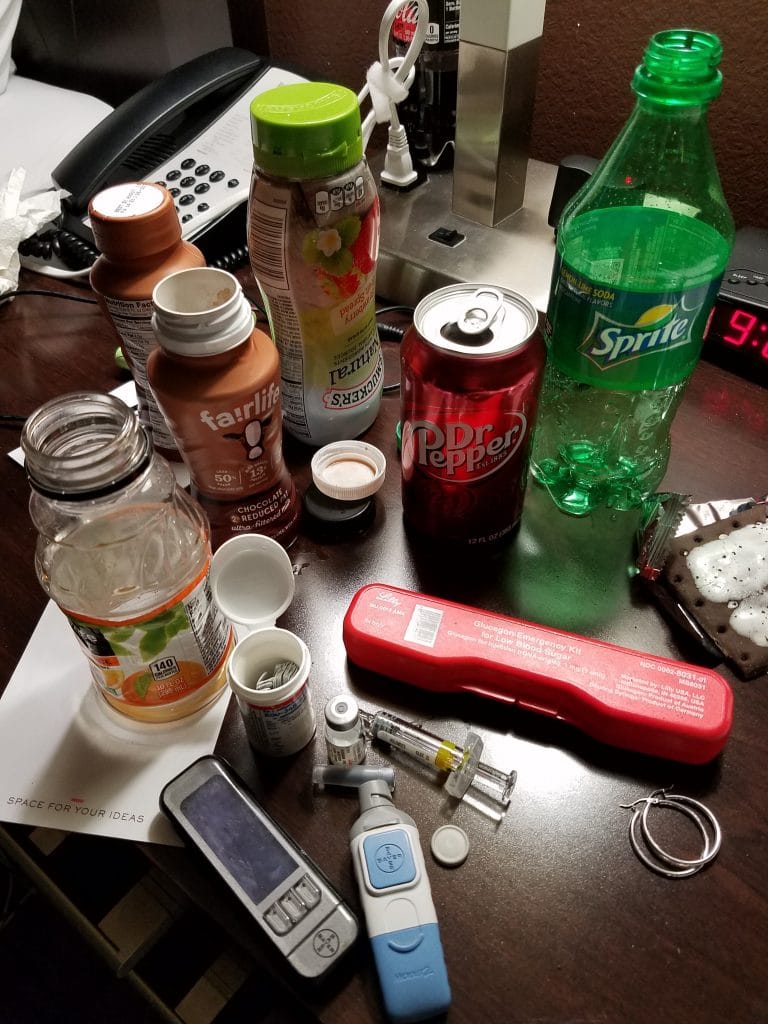 A Fast and Long Day

On day 10 of my #T1Determined Type 1 Diabetes Run Across Texas, I had a little over 300 miles behind me. I had just finished a 41-mile day running on TX-302, a busy oilfield road that connects the tiny town of Kermit, TX with Odessa.

I had run a fast pace that day, partly because we didn’t have a lot of free time between sunrise and sunset and I didn’t enjoy running in the dark on a 2-lane road that had semi trucks whizzing by at 70 mph.

As a result, I had either taken my meals walking or simply cut them short, slamming down whatever I could stomach and hoping it had enough calories to take me to the next stop.

To make things more difficult, my blood glucose had been running high nearly all day. Not a single reading was below 200 mg/dl, and I was barely taking on any carbs.

In situations like this one, when we’re not taking on new fuel, our bodies are pretty smart at using onboard energy stores to power through. I wasn’t eating enough and I was running fast, so I was burning through a fair bit of my glycogen stores as well as body fat and protein. The small amount of dietary fat and protein I was taking on wasn’t nearly enough to cover a daily drain of 5500-6000 calories.

As I’ve written about here, the balance between fueling, insulin sensitivity and stress is a complex one. Physical stress can cause your body to dump glycogen (to help you escape the metaphorical “cheetah” it thinks you’re fleeing), and when you don’t have time (or take time) to eat, it also switches to backup energy sources. The net effect of stress on people with type 1 is to hold blood sugars high while the stress remains. But as you slow down, eat, and relax, your body switches to a mode where it converts the new energy from food into glycogen, replenishes your glycogen stores, and makes your body more effective at using the insulin you have on board to store energy.

This means that while your blood sugar may be high during a long, stressful run, when you stop, it can “tank” precipitously.

That’s exactly what happened to me that evening in Odessa. After getting a shower, getting dressed, and heading off to dinner, my blood sugar started a long, hard dive.

By midnight, it was 30 mg/dl, I was wavering in and out of consciousness, Leslie had given me an emergency glucagon treatment, and I had drunk nearly all the orange juice we had in the van’s fridge.

What Could I Have Done Differently?

Looking back, I realize several things:

I knew in my heart that I had not taken the appropriate fueling strategy. That one’s on me.

Granted, it’s easier said than done to reduce stress when despite all your planning, you find yourself on a highway you don’t even feel comfortable driving on. But it’s something you have to try.

What is Sympathetic Nervous System Overload?

While it may be somewhat of an oversimplification, broadly speaking, the Sympathetic Nervous System is made up of the systems in your body that manage alertness to stressful situations.

Introduce a little danger, and your sympathetic nervous system goes into overdrive: your heart rate goes up, your respiration increases, you feel a surge of adrenalin, and your body goes into fight-or-flight mode, increasing blood glucose and making more energy available to the muscles, relying on its own energy store, and helping you “escape the cheetah.”

The more stressful inputs your sympathetic nervous system encounters, the more aggravated things become. If you’re not able to avoid, redirect, or reason your way out of the stress, outright panic can set in. If the situation is bad enough for long enough, “traumatic stress” can take hold.

An Army doc friend of mine introduced me to the idea of sympathetic nervous system overload. I like to think of it as “pre-PTSD.” It’s not something you can just “Zen” your way out of by thinking positive thoughts–you have to actively manage it.

Your parasympathetic nervous is the “yin” to the sympathetic’s “yang.” It’s what kicks in when the crisis has past, you’re a little shaken, and you feel like you could eat a horse and sleep for 12 hours. Strangely, it’s a time that’s just as energy-consumptive as exercise, but in a different way. Blood sugars can run low as onboard energy is directed to replenishing depleted stores.

During that time, your body refills the glycogen “gas tank”, takes out the cellular “garbage”, and rebuilds damaged muscle.

The parasympathetic nervous system also plays a role in calming you down. You can’t take “air traffic control” conditions for very long before you start making critical mistakes.

Under sympathetic nervous system overload, it’s critical to not “lose it” amidst the stress. But that’s easier said than done.

Being able to summon calmness is a real Jedi Mind Trick that comes only with practice.

I had a taste of that when in my first 140.6 (full Ironman length) triathlon, I found myself in 2 ft. chop during heavy rain on a windy lake where one of the rescue boats had capsized and the other ignored or didn’t see my signal for help. My options were limited: turn around and swim for shore and hope I made it.

Believe it or not, having limited options actually reduces the stress a bit.

What You Can Do to Avoid SNS Overload

In SNS overload, it’s not really possible to just wish away the stress. But you can activate your parasympathetic nervous system with a few focused actions and get things under better control.

Some special forces folks have learned techniques for activating their parasympathetic nervous system in even the most stressful situations — for instance, deep breathing and analyzing your situation and reviewing your choices. I’ve stolen and adapted or added some techniques below based on my experience.

If you do a little Googling on “activating parasympathetic nervous system” you’ll see prayer and meditation listed also. It’s interesting to me that those specific activities seem associated with stillness, ritual, and a focused mind.

Fifteen plus years ago, when I was considerably overweight (50+ pounds) and worked in high-stress jobs first in software / technology and then in sales, my blood glucose would run high no matter how disciplined I tried to be about controlling my type 1 diabetes.

It was only after well over a decade that I learned that it was the stress of the job that not only made me prone to overeating, but elevated my blood glucose and increased my insulin resistance (after all, I was mentally fleeing the cheetah!) and consequently, my weight, as greater amounts of insulin helped me store more and more food energy.

The ironic thing is that if I had stopped self-judgment and anxiety about my weight and taken a few small steps (literally… walking!), I’d have dug myself out of that pit sooner.

Despite the fact that it was 15 years and 50 pounds later, Odessa was no different. I should have focused on mentally and physically healthy behaviors, slowed down, continued to eat, and focused on the one rational thing to do next.

I’ve taken those lessons to heart. I no longer dwell on them except to remind myself of the things to do differently going forward.

I still have good days and bad days. On the bad days, I tend to forget the stuff I just talked about–one indication that I’ve still got a ways to go. On the good days, like when I come in from a training run with a sugar of 101 mg/dl, I feel like I landed a 747 in a snowstorm without even cracking a sweat.

Consciously activating your parasympathetic nervous system can calm you down, keep your mind still, and reduce the sense of panic and non-efficacy that many of us have felt about living with Type 1.

To me it’s worth trying.

With luck, T1D may actually feel a little bit easier to manage.

← Type 1 Diabetic Ultrarunning Tips for 100° & Higher Summer Temperatures: What I’ve LearnedPressing “Pause”: Running the USA In The Age Of Quarantine →