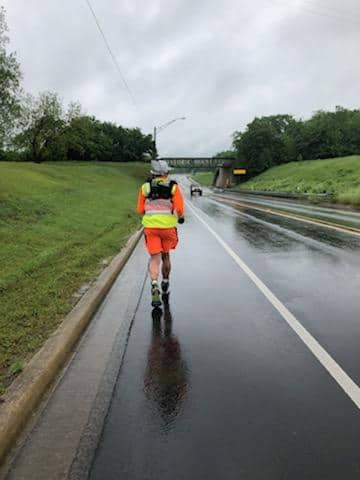 “All of our life has been a wicked ride.” — Melody Gardot

What started as a simple question someone asked on Facebook — why run across Texas? — has turned out to be an exceedingly difficult and at times philosophically complex question to answer, partly because after some introspection, I’ve decided many of my reasons are not only multilayered but dependent on each other. A single, simple answer has somehow eluded me.

The most obvious reasons are simple: because it’s the biggest state in the lower 48, 850 miles, and 2.5 times the longest distance I had previously run across Iowa. These are all true; however, for the most part they sum up only one aspect of the answer: epicness. Without a doubt, the epic scale of an endeavor plays a significant role, but to answer “why do epic?” with “because it is epic” begs the question.

Epic by itself cannot be enough. What the ego conceives must inevitably meet head on with the practicalities of planning, crewing, and paying for such projects, and attracting the interest of sponsors to help share your story, enable your best outcome, and soften some of the financial blow. Well before those become issues, the simple but tedious process of training one’s mind and body to push to the edge of its limits without causing physical and psychological catastrophe will grind you into dust. Wanting to quit will become a stronger draw than wanting to go on.

The second set of reasons, and not necessarily second in importance, has to do with type 1 diabetes. I wanted to show people who still live with ingrained prejudices about type 1 diabetes and lifestyle that I am out there living a far healthier life than they are in their genetically normal utopia. I wanted to bring attention to the fact that people like me who are bonafide athletes can take every bit of advice to eat right and exercise and still wake up diabetic.

But I could have stopped long ago, when I ran my first half and full marathons, did my first half and full Ironmans, or completed my first 100-mile run. Anyone with a head on his shoulders would have at some time gotten the point that many — in fact, a proportionally greater number — of us type 1 diabetics are living more physically active lives than normal folks, despite having to do it with one eye looking over our shoulder hoping that death does not come for us in the night in the form of a severe low blood sugar from exercise.

I could say that I do these things because I want to educate the ignorant or influence policy makers to not exclude people with chronic diseases from access to affordable health care. I may change a few minds, but that is not a boulder I can move all by myself, and one can do nearly every one of these things without a masochistic pouring-on of pain and suffering for the runner and his crew.

There are other reasons, more practical and utilitarian, that are means to an end, or simply matters of convenience or logic. Because I live there. Because I previously ran across Iowa. Because Texas is 1/4 to 1/3 of the way across the U.S., and since with its mountains and desert in the west, dusty flatlands a little further east, rolling hills in the center, and humid, piney woods in the far eastern part, Texas is a scale model of sorts for a transcontinental run, and a good place to practice.

These things make sense in terms of intermediate training goals. But the goal of an epic endeavor itself cannot be simply to complete all the events that led up to it. There’s a gestalt that never quite escapes you: I am running across the largest state in the U.S., why in heaven’s name am I doing this, how soon can I get it over with before I lose resolve, and what will I do to top it?

The answer will not magically emerge from training, or from simply scaling up smaller events. Sooner or later, you will run out of runway, launch and complete your epic event, and find yourself asking, “Now what?”

One characteristic of epic that appeals to some data-heads is the sheer complexity of it. Epic events are moon shots of sorts: very difficult to pull off successfully, and not any simpler on paper than in reality.

One must take time to research and scout routes and seasons / times for the event; develop a logistical timetable identifying daily mileage and break points; stock the support vehicle with food, liquids, gear and medical stuff; train for weather, distance, and terrain; anticipate fatigue and emotional volatility; run through likely and worst-case scenarios with the crew; decide what data and analytics to monitor during the run; and plan for success and develop contingency and post-mortem plans for failure. One must also manage work absences or find ways to budget time to work remotely and on a part-time basis during the event.

Some people are good at this. Some are not. Failing to prepare thoroughly will always come at a cost: getting lost, taking forced detours, running low on food, water, or sleep; having no place to stay; getting caught in week-long thunderstorms and floods; finding oneself in an emergency room or medical office trying to rehab from severe dehydration, stress fractures, torn ligaments and other soft tissue damage, cramps, and more. The list goes on. If you have sponsors, you need very good explanations why you didn’t anticipate any of the above, and a concrete plan for figuring out how to continue.

Simply being logistically able to pull off an epic event is as the mathematicians say, necessary but not sufficient. One does not do the epic to prove that the parts that make it up can be done.

There are other reasons that don’t quite fully explain things.

I used to push myself to run farther to impress friends. But friends support you even when you fail.

I used to try to outdo whatever my last exploit was at the time in order to impress naysayers, or to at least prove to them that I was more of a hero and less of an ignorant jackass than they were. Somewhere along the way, as physical activity brought me confidence, control, and self-esteem, I ceased to care about what they thought.

I used to run to prove to my father that I was worthy of his love, but as I’ve gotten older, I’ve realized that was never missing. I know he’s exceedingly proud of all his children.

Which brings us to the philosophical reasons.

Because it is there? LOTS of things are out there, and it’s important to understand yourself well enough to know when a particular “there” is poorly matched to your innate ability, training level, personality, and tolerance for bad outcomes. For instance, I have no desire to do bike races, because I’ve broken enough ribs and bruised enough ankles, knees, and shoulders at relatively low speed that I have no desire to do something that combines speed with the likelihood of broken bones.

Not that I don’t have a tolerance for pain — after all, I’ve broken ribs and a heelbone running. But not often. I’ve run 50-some-odd miles of a hundred-miler on severe blisters, pressed on an extra 150 miles during a 300 mile run after I knew I had tendinitis, and run myself to the point of severe hives, and painful edema in my feet. One recovers from these things pretty quickly. But at nearly 60 years of age, I do not like breaking bones. There are some epic things I have no taste for.

So I have to ask myself not why I run, nor why I run so far, but why I continue to do these things when no single one of these reasons is sufficient to explain what it feels like to want to do them.

I think the reason is that none of us lives forever. There are things I want to accomplish through running long distances, but I won’t be able to do that if I stop early. I’m almost 60 years old. I… we… none of us knows when we step out the door for our morning run whether or not it will be the last time we can run 50 miles, or 30, or 20, or 10. We do not know on any particular day whether our best days are behind us. We only know that one day they will be.

I do not fear that day. But I know it will come. Before it does, I want the tattoos, the pain, the elation, the transformation of perspective, the little victory dance, and the warm satisfaction of having done something really big and difficult despite extremely low expectations.

When I put up my running shoes for the last time, I don’t want to look back at what I really meant to do but never got around to. I don’t want to remember the arguments I’ve won, the game shows I’ve watched, the wealth I’ve amassed, the excuses I offered or accepted for lassitude or inaction, or at anything else that doesn’t evoke a memory of a life well and fully lived. I want to be able to stand hand-in-hand with my wife, look out the door at the setting sun, and say to myself without regret, “Well… that was one wicked ride.”