Exercise and the Medtronic 670g (with Auto Mode): What I’ve Learned So Far

UPDATE: In November 2018, I switched from my almost-new Medtronic 670g to the Tandem t:slim X2 and Dexcom package, at my own expense.

Back in March 2018, after the announcement that Animas would be shutting its doors, I had to make a decision about when to migrate from using my trusty Animas Vibe, which when I got it in April 2016 was the only IPx8 waterproof insulin pump on the market, to the Medtronic 670g, which is now the one of the only two REMAINING Ipx8 waterproof insulin pumps on the market.

I decided to make the cutover near the beginning of March, giving myself 3 months to get used to the new system before doing a solo 339-mile run across Iowa, rather than placing another order for supplies for the Animas, which would have forced me to cut over right before the Big Run. 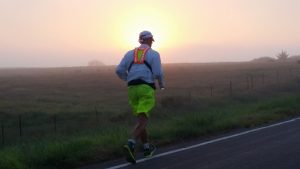 Here, I’ll try to give an honest review of the features and capabilities I value as an athlete, along with the foibles and downright letdowns that annoy me to no end.

I hope this is useful to those of you who are #diabadasses and looking at this pump. For what it’s worth, I looked at the Tandem T-slim and basically, it’s “dunk proof” but not waterproof. I also looked at the Omnipod and saw too many complaints about delivery failures, occlusions, and other issues; plus my one-on-one experience with reps at trade shows felt a little… well, uncomfortable. I know there are a lot of podders out there, and I respect that it’s a great and widely used pump, but even with my complaints about Medtronic, they’ve always been a reputable company with a solid support infrastructure, and while their technology sometimes feels like an awkward teenager that’s late to the prom, it is generally VERY reliable and the benefits of working with the people, specifically the local sales support and training reams, are often understated and under-reported.