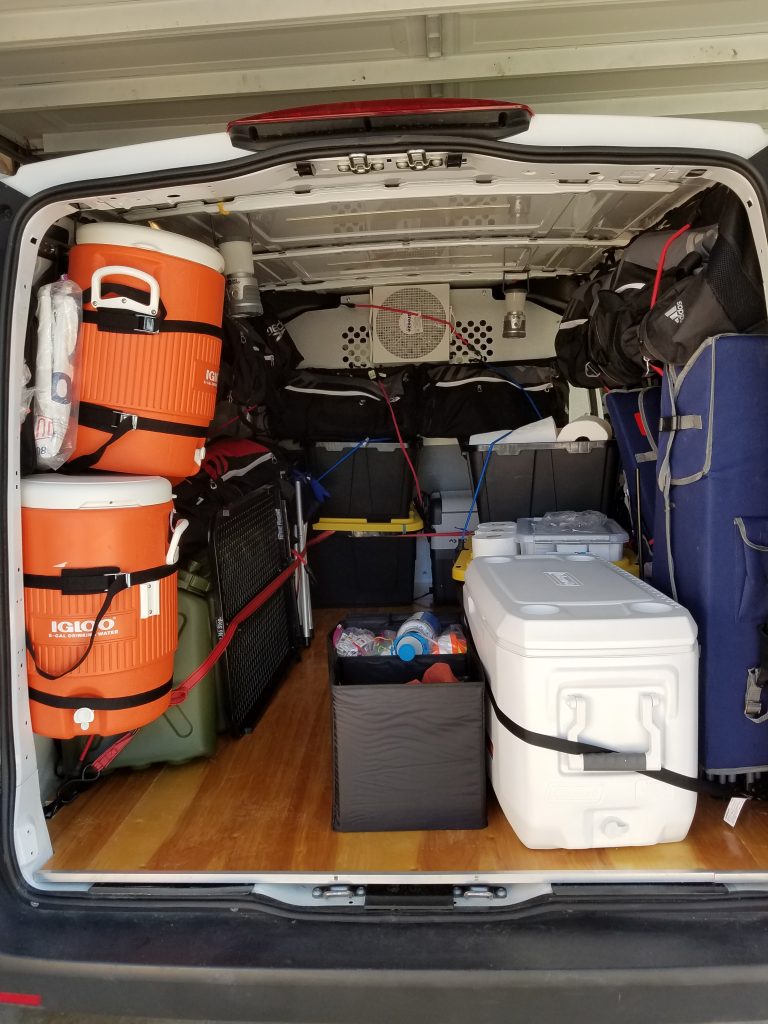 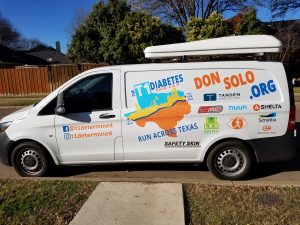 Our chase vehicle is a 2017 Mercedes Metris cargo van outfitted with L-track lashing rail, sound-deadening foam, and varnished birch decking, which we cut and fit to allow access to the D-rings on the floor. We bought the van used from a bankrupt lawn service business and upfitted it to be suitable for our purposes. At the time, it was a little above our budget but it helped that the seller was anxious to reclaim his investment in the vehicle. We had originally been looking at a Ford Transit Connect when we discovered that the Metris short wheelbase has a little turbocharged 4-cylinder engine that gets 25 mpg, has 1.5 more linear feet of storage than a Transit Connect, and still fits in a standard residential garage with 4.5 inches to spare.

We’re counting on those 4.5 inches, we installed a Rhino Rack roof rack, which has a total mounted height of 4 inches, for mounting an Autohome Columbus Variant rooftop tent.

The tent has the footprint of a “full”- / double-sized bed, slightly smaller than a queen, and sleeps two adults reasonably comfortably. In a pinch it could hold a third, provided everyone was family or close friends. It’s got a battery-powered interior light, is pretty solidly weatherproof (except for high winds, I suppose), and stows itself inside a hard clamshell case when not in use. It has gas struts for self-deploying and is ready to occupy in less than 30 seconds — something we value.

Battle Born LiPO4 Auxiliary Battery.  We chose to go with the Battle Born 100A-hr (1200 watt-hr) lithium iron phosphate (LiPO4) deep cycle battery. Unlike a starter battery for your car, deep cycle batteries are designed to be nearly depleted before recharging and nearly fully recharge. They’re considerably more expensive than a car battery but because they deliver a lot of power reliably (something you want in a motorhome, for instance, if you’re not connected to the power grid) and charge quickly, they’re usually worth the price. 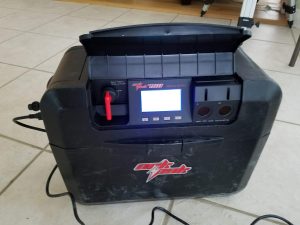 ArkPak Portable Battery Pack.  The ArkPak performs several important functions in relation to the deep cycle battery. First, it covers the terminals and connects them to more conventional means of tapping power in the battery, namely, a DC (car charger) power port, a current inverter (converts DC to AC), and a charging port on the front of the battery pack that allows you to “top off” the charge by connecting it to your car battery when your vehicle is running. It has charging cables for charging from both AC (outlet) and DC (car charger) power sources. It has a voltage isolator you can use to make absolutely certain that nothing in the vehicle is drawing power from the battery. It also comes with a power switch for the current inverter, so that if you don’t actually have AC power devices plugged into the inverter, it avoids letting the inverter draw the 6W load that it puts on the battery even when not running; thereby increasing battery lifetime. When possible, we use low wattage DC devices and connect them to a DC power hub that fits into the DC power adapter and multiplies the number of available DC power sources. The ArkPak also comes with a couple of USB power adapter ports, but a good DC power hub can provide additional USB charging ports above and beyond that, and the best ones will allow you to power off the hub when you’re not charging devices, again conserving battery power. When you have to power everything that feels like civilization off a 12V battery in your van, you get pretty miserly about conserving power — especially since we have not installed solar charging cells (yet) on our van.

We also carry an emergency battery “jump” pack similar to what AAA brings when you call them from the road with a dead battery, as well as an adapter cable for charging batteries from the typical RV power hookup found at campgrounds. 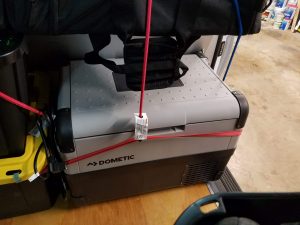 This compact, high-capacity, low-wattage refrigerator will keep food cold — not just cool, and without having to deal with “cooler soup” from constantly replenishing ice, which is difficult to do in west Texas, given the paucity of gas stations and grocery stores in the first 300 miles. It pulls about 50 watts (thus the name) when the compressor is running, and about a quarter of that when it’s just connected and idling. From a 1200 watt-hr lithium deepcycle battery, that’s not much of a load, and if it’s the only thing drawing power in the chase vehicle, even with the lid open and the compressor running constantly, it takes 24 hours to drain the battery. In reality, since the compressor’s not running constantly, the Battle Born will run the fridge for about 4 days without recharging.

You’ll notice a chest cooler in the picture above. The Dometic is behind it. The chest cooler is to keep drinks cold and to provide a source of ice for filling my cooling bandana (see below) during hot runs. 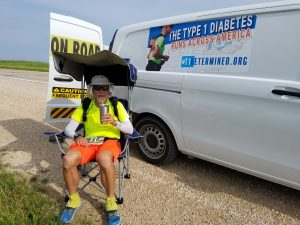 I’d be remiss if I didn’t mention Renetto. They make a folding “tailgater” canopy chair that is tough as nails. I’ve used them again and again on impromptu roadside stops on hot, sunny stretches where there wasn’t a single tree in sight. They are a godsend when you are trying to cool off and simply hydrating and wearing a hat isn’t cutting it any more. Ours stows easily atop the passenger-side wheel well and sits in a J-brace attached to L-track (see below). 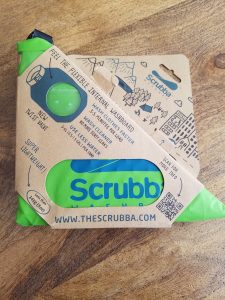 Remember those old National Geographic pictures of people beating clothes over a rock at the edge of a creek? Turns out they weren’t so dumb. Take away the rock, add a travel-size laundry detergent packet, and replace the rock with a sealable, durable plastic / rubber sack with bumps on the inside and a valve for venting excess air. Put your clothes in the bag, knead it like pizza, and out come clean clothes. Uses very little water (one 16-oz. bottled water is enough) so it has a very low gray water waste profile. 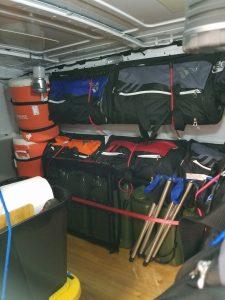 We took 9 Adidas Team Issue duffel bags and grommeted the bottoms of them so we could hang them off L-track lashing rail (made by US Cargo Control) inside the crew van, creating “soft cabinets” where we could store clothing, medical supplies, first aid, hygiene, and safety gear. We color coded and tagged the bags so we could locate contents easily. Red bags were for first aid, blue bags for night visibility gear, and orange bags for daytime hot weather gear. It worked pretty well.

Biffy Bags. For #2, these are #1. 🙂 If you use a porta-toilet setup, as you might with a camper, you have to deal with black water disposal and unsanitary sloshing liquid in your vehicle. It makes it much more difficult to cook and sleep in the same space unless you have a full-on camper — which we don’t. Biffy bags provide a moisture absorbing, odor-deterrent alternative that seals into its own zip locking disposal bag. Those bags can then be placed in the regular trash and disposed of in a trash can along the route, which is something even the most primitive roadside pull-offs have. 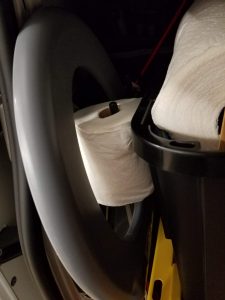 I’m not extremely trend-conscious when it comes to shoes, running gear, and that kind of stuff. I care more about running without pain or injury.

And after hundreds of miles on the road, little things can bother you. So let me start with what I don’t care about and don’t like. Then it’s just a matter of backing into what ISN’T that.

I don’t care about stabilization (didn’t know my feet were unstable), pronation, or heel drop unless I’m actually feeling the consequences and it hurts. I don’t really care about how heavy my shoes are or how fast I run, as I’m doing it all day. I’m not trying to optimize my hydration or nutrition or any of that. I don’t need all my nutrition orthorexically balanced and packed into the minimum space possible. I don’t like stuff that feels heavy, tight, or like it’s getting in the way. I don’t like electronic gear that sucks a lot of battery power, and I don’t like dim safety lights or non-reflecting, low-vis clothing. I don’t want thin-soled racing flats, or spongy soles unless they can take a repeated beating on 500 miles of asphalt.

I have one goal: run very long distances without getting sick, getting hurt, or rubbing a raw spot in something tender. After that, it’s all fairly minor stuff.

My go-to gear isn’t about speed or fashion; it’s a reflection of those desires to remove little annoyances that turn into big problems over long distances.

Below,  I’ll tell you below why I like each one so much.

← What Goes Into Planning an Epic Run: The RouteType 1 Diabetes Run Across Texas – Event Report →